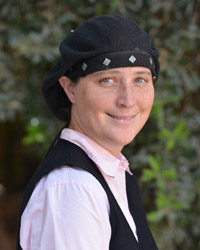 How did you end up at Machon Maayan?

It was 2004 and Meryl Lee lived on my street and was starting to open Machon Maayan. A few of my former students knew her and her family and thought it was a good idea for me to work here, so I met with Rav K, and here I am.

What do you teach/what’s your job at Machon Maayan?

At Machon Maayan, I have two hats. In the first hat, I teach classes in the development in Oral Law, Chumash, Jewish Literacy, Rabbinic Authority, Mitzvot, and sometimes on the thoughts of Rav Hirsch–it really depends on the semester.

In my other hat, I serve as the Executive Director at Machon Maayan, and I deal with things from contracts, human resources, finance, scholarships, and everything in between.

Who is your favorite character in Tanach? Why?

Hm—this isn’t in Tanach, but I’m going to go for Rabban Gamliel. Rabban Gamliel was the nasi, the president of the Sanhedrin during the period almost immediately following the fall of the Second Beit Hamikdash. At that time, the center of Jewish learning had moved from Yerushalayim to Yavne–next door–and it was really a very tumultuous time for the Jewish people because they had lost their center. The question of how they were going to survive under Jewish sovereignty was a very real and serious challenge, and the threat of the Jewish people splintering into all sorts of different subgroups having lost Yerushalayim was really very significant. In comes Rabban Gamliel, and he has rule with an iron fist in the sense that he has to demonstrate very unequivocally that the authority of the Sanhedrin, to whatever extent they still had authority, had to be unchallenged and he did an awful lot to both reinstate traditions and to shut down all sorts of voices that he felt might lead to the splintering of the Jewish people. Therefore, I think that his efforts really prevented us entirely breaking into smithereens on the one hand, and it allowed the Jewish people to figure out how to pull themselves together and to survive and thrive, ultimately, even after the destruction of the Second Temple. It seems to me that we would not be here today had it not been for Rabban Gamliel, and something about sitting here, in  Givat Washington, basically walking the path that he probably walked, is very inspiring.

If you could go back to any time in history, where would you go?