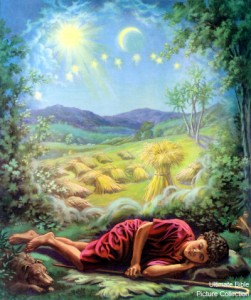 In this week’s parsha we learn about Yosef’s dreams and the deterioration of his relationship with his brothers. Yosef’s two dreams played a significant role in the resentment of the brothers towards him. The Beit HaLevi teaches that the Torah tells us that after the first dream the brothers hated Yosef, and after the second dream, they envied him.

So, the question is, why? What’s the reason for this difference?

The dreams represented two areas in which the brothers would become inferior to Yosef. The bundles of wheat in the first dream were symbolic of Yosef’s future superiority over the brothers in Olam Hazeh. The bowing indicated that they would need to rely on Yosef for physical sustenance. But, success in Olam Hazeh does not make someone intrinsically superior, it just means that they have more material possessions. Based on this, the Beit HaLevi concludes that the first dream represents gashmiut–the brothers themselves were not subservient to Yosef, but rather their physical possessions were lesser. In contrast, the second dream represents Yosef’s future spiritual superiority–spiritual accomplishment is the very thing that defines the intrinsic greatness of a person. Therefore, the second dream represents ruchniut.

So, why did the brothers hate Yosef after the first dream, but envy him after the second?

Hatred stems from physicality–in this case, resentment of one’s possessions, whereas jealousy and envy arise when one feels inferior to someone else. The brothers hated Yosef after the first dream because they were uncomfortable with the implication that they would be ruled by and be reliant on Yosef for physical sustenance. They were jealous of him after the second dream because it implied that he would be spiritually greater–something that is not external or physically attainable.

From this week’s parsha, we learn that our ruchniut is what defines us, not our physical possessions. With that, I want to give you all a bracha that you will merit to recognize and achieve true greatness through your spiritual accomplishments.

Thank you and Shabbat Shalom.

Based on the teachings of Rav Johnny Solomon